Hi Everyone! Nymeria here! Boy, it’s been a while since we’ve blogged!

We just wanted to send everyone an update on how we’ve been! Since Mia has been recovering really well from her hip/elbow dysplasia, we’ve been taking advantage of the summer weather and going on adventures everyday!

Here are some highlights! 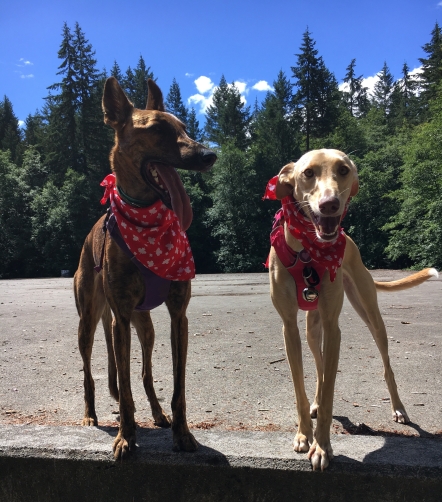 Avalon and I celebrated our Canadian Citizenship over the weekend on Canada Day! 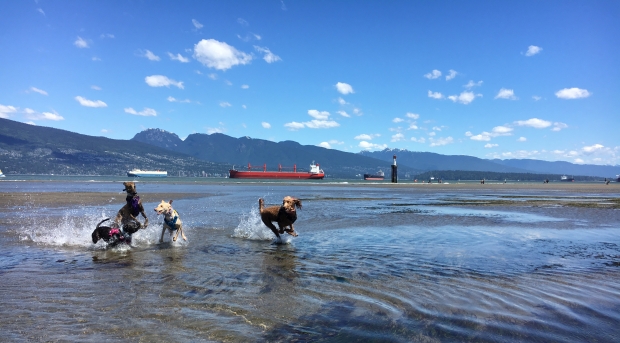 Running in the snow IN THE SUMMER! 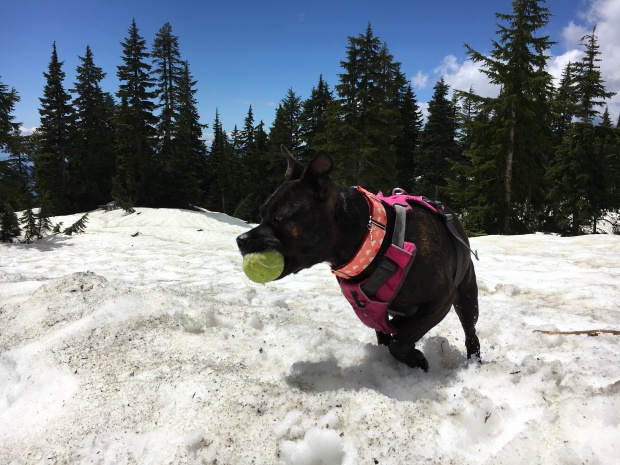 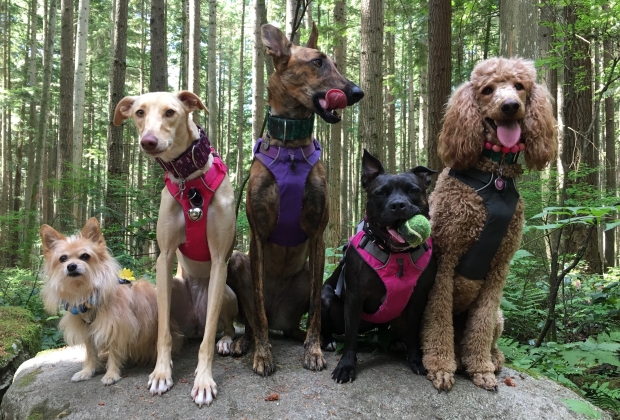 I’m still still figuring out how to use my Instagram but you’re welcome to check it out too!

Hope everyone is having a great summer! We’ll be back soon!

Time for a nap, we’re pooped!

Hi guys! Hope you’re having a fun weekend! We’re back at low tide again and boy was it a blast! 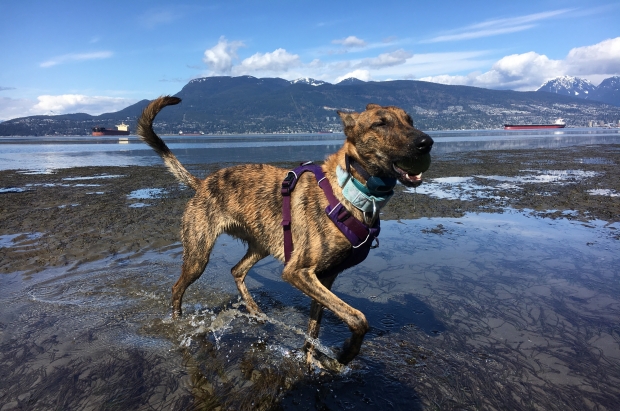 With the weather warming up a bit, the humoms want to take us out here as much as possible! There’s so much more running space out here, it seems endless!

With long legs like mine, I need to RUN RUN RUN!!!

My humom still has to watch out for Mia though, we recently found out that she’s got mild elbow and hip dysplasia so humom limits the amount of running she gets to do. That’s why you always see Mia with her ball. As long as Mia has her ball she’s happy! She’s always in her own little world when it comes to balls! BOL! 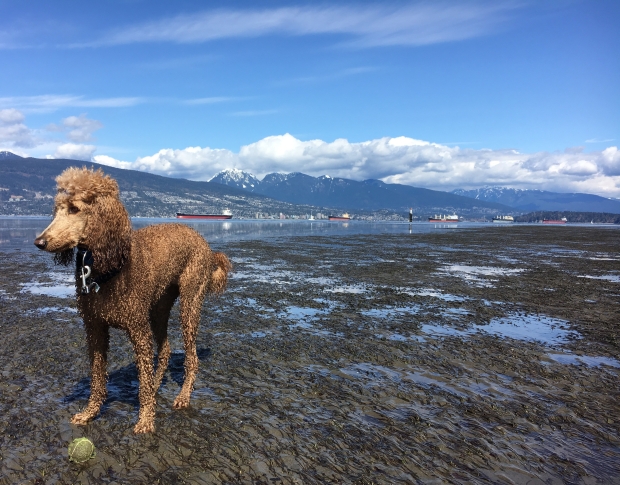 Wilhelmina also likes balls! She found one while we were out on low tide! 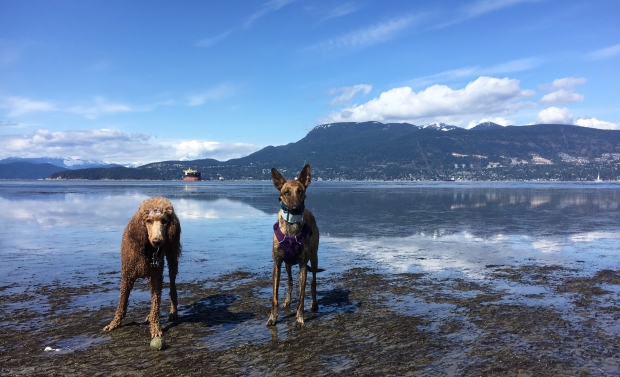 She likes to tease us with it to get us to chase her!

And of course, we can never forget about Duffy! He may be little but he can still run with the big girls!

The humoms failed at getting an obligatory posed photo with all of us looking at the camera. Don’t they know by now it’s an impossible mission, especially when we’re out on low tide??? Sheesh. They’re always so hopeful BOL! 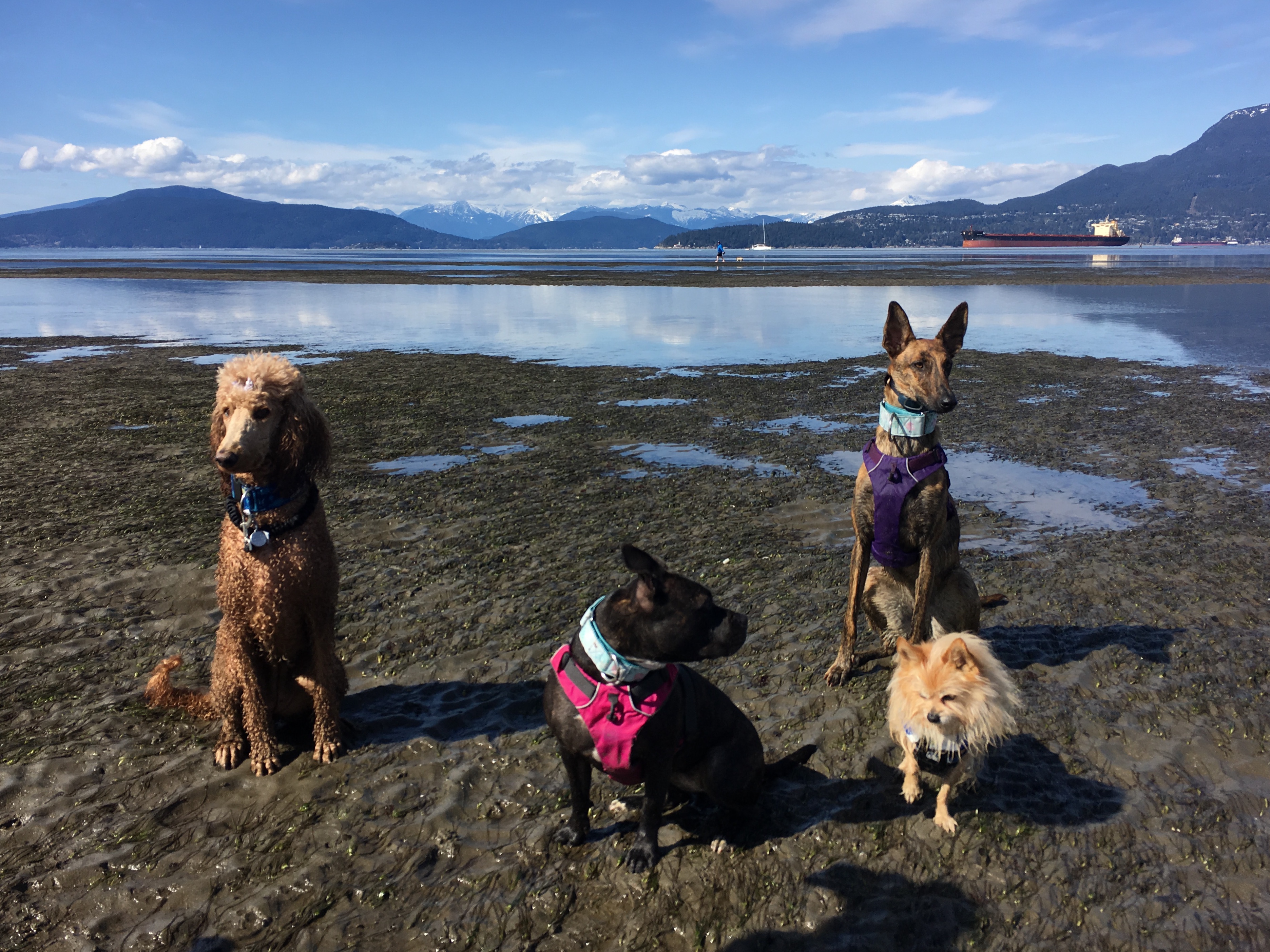 Now we’re missing Avalon! Where did she go??

Oh well this will have to do! Now time to play!

Hope you guys enjoy the rest of your Sunday!

Hi Guys! Nymeria here! Hope everyone had a great Easter Long weekend! I sure did! I got to experience my first low tide!!! IT WAS AMAZING!!!!! The best part was I got to experience it for the first time with my bestie Avalon and the rest of my pack!

As you know Wilhelmina and Mia have gone to low tide lots of times and boy do they always have fun! Now it was my turn!

Hurry up and throw the ball mom!

Notice Mia’s fleece is falling off? BOL! Yup that’s typical Mia for you…she doesn’t even notice it, she just keeps playing. The water is still quite cold in April so our humom wanted to make sure Mia didn’t get too cold.

Mia says that if we’re really well behaved humom will take us lots more times this summer! I promise I’ll be on my best behavior!

Have you guys ever been to low tide? Do you love it as much as we do?

Hi Friends! Hope everyone is having a great Easter weekend! We’ve been having too much fun these past couple of weeks that we’ve been missing in action here in Blogville! We’ve got so much to share with you, stay tuned!

In the meantime, Happy Easter! 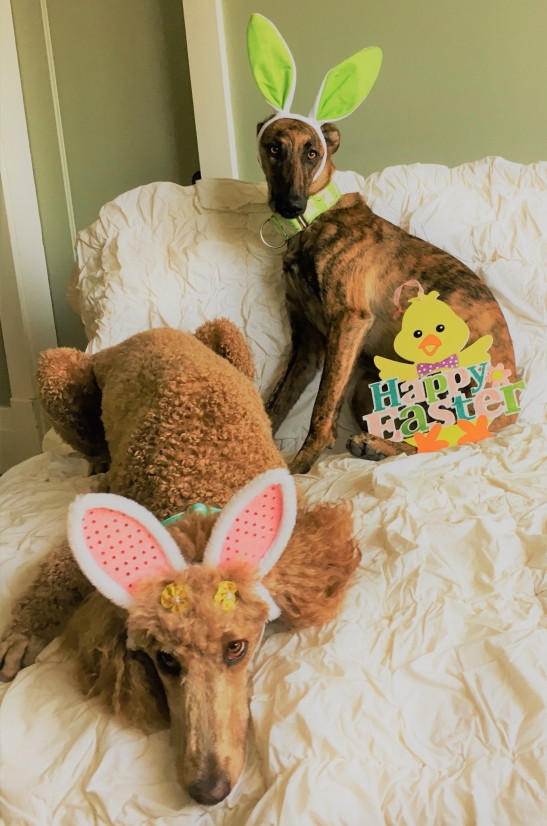 Mia: Is the humiliation over yet???

Nymeria: I don’t know what Mia is complaining about…Easter is delicious! Avalon: I agree with Mia, this is humiliating!

Hey Everyone! Apologies again, we have been missing in action…again…I have been dealing with some issues with my leg and we had to go back to the vet.

We got some x-rays done and my humom will be getting a call from the vet today or tomorrow. I guess for the next couple of weeks we will be laying low. I won’t be able to do the things I love for a while…like running on the beach, exploring the forest or my favorite: playing fetch!

I guess it’s fitting that today is World Sleep Day! It’s time to sleep and recover! Happy sleeping everyone! 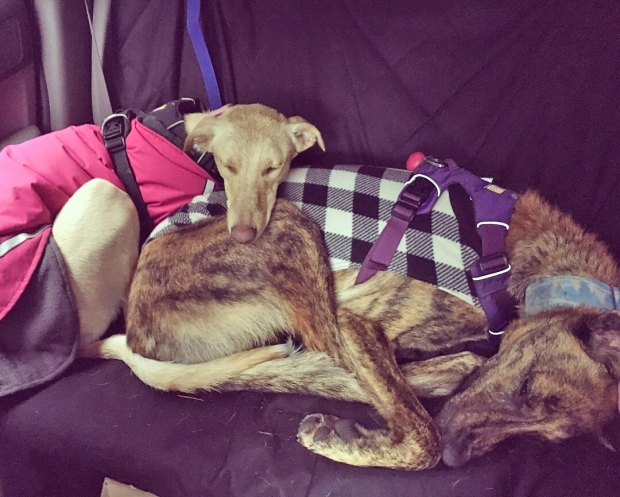 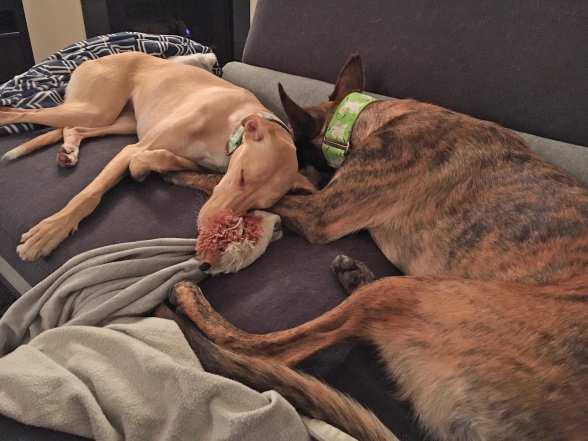 Pee S. Thank you everyone for the well wishes from my last post. I was really sick and it definitely sped up my recovery!

Can we help you? We’re trying to take a nap!

I’m taking over the blog today to talk about a very special day today. It’s Día Del Galgo or World Galgo Day! Though Galgos (and Podencos) need help all year round, February 1 was chosen as the day to unite people to help bring awareness to our plight. This is the official website if you would like more information: www.diadelgalgo.com

The galgo is an ancient breed, originally brought to Spain by noblepersons and was held in high esteem.  After years and years of theft and breeding by the lower class, the galgo became viewed as a “trash dog” and only owned by the lower classes. The galgo was bred for hunting (hare) and coursing. They spend their lives in damp, tiny dirty holes or windowless shacks until they are needed to hunt. They are typically fed only water and bread, it is believed that they hunt better when starving. They are deprived of any human affection because it is believed to harm their hunting abilities. Unfortunately, once the hunting season is over, the Galgueros (galgo handlers) deem the galgos worthless or too costly to maintain. It is cheaper for them to buy new dogs than to feed the old ones.  Many are killed in a variety of inhuman ways. The “lucky ones” are dumped at the shelter while others are shot, poisoned, drowned, hanged or even burned to death.

It’s been an ongoing fight to stop the hunting in Spain and unfortunately thousands of Galgos and Podencos are still being killed, tortured and abandoned every year. The number is estimated to be 150,000. 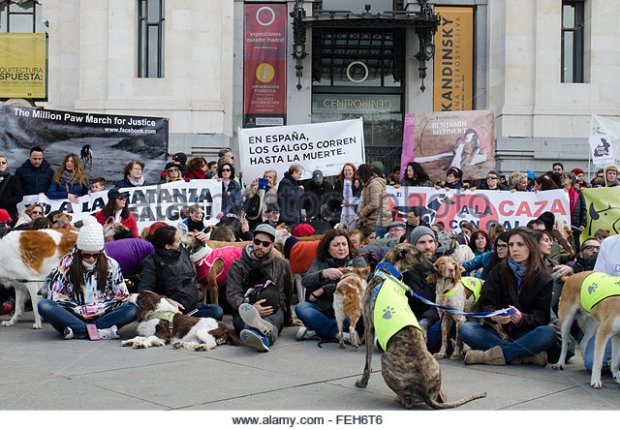 Rescues like Scooby Medina, Galgo Del Sol, Ibizan Hound Rescue, Galgos en Familia and many others are filling up with thousands of puppies, adults and seniors, all trying to find them forever homes. They are always in need of donations and foster homes. 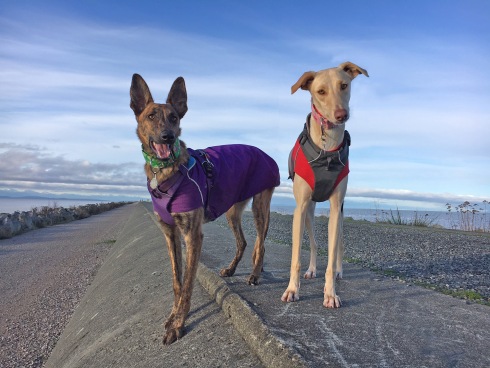 My fellow galga Avalon and myself have been fortunate enough to find loving homes here in Canada. Avalon was rescued by the lovely people of Ibizan Hound Rescue.

Isn’t she the cutest puppy you have ever seen?? Just look at that sweet face! You never know it just by looking at her but she’s a very mischievous little girl!

I was rescued by Scooby Medina.

I was found with a male black Galgo named Timon. They’re not sure if he was my dad but we were very attached to one another. We both had very bad skin when we first arrived in the shelter. They gave me a tennis ball to help burn off my energy! All I wanted to do was play play play! Timon was very shy and weary of people. Eventually I was moved into another paddock with other puppies my age. Sadly he is still at the shelter. He has not been adopted yet 😦 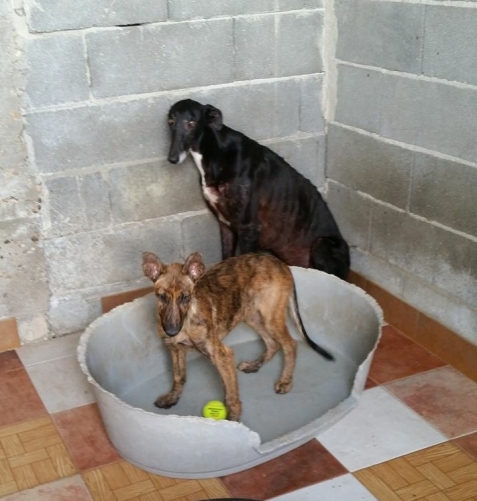 I was a really tiny puppy! I’m definitely not that small anymore! BOL! 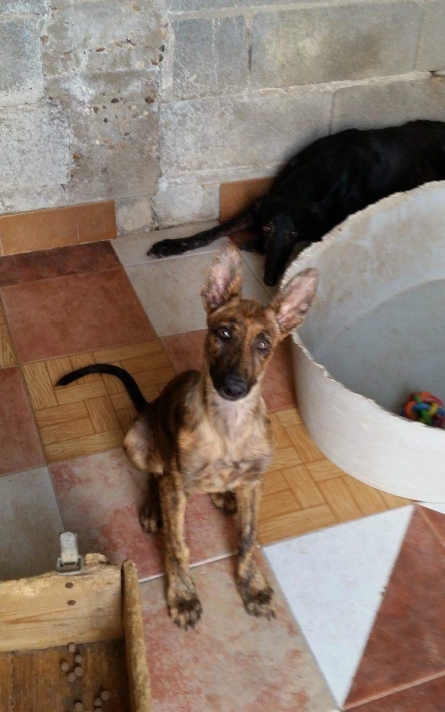 My humom thinks that I am a mix of a wired haired Podenco and a Galgo. I have the ears and hair of a Podenco but the brindle of a Galgo. Let’s not forget my long tail of mine! It’s measured at 22 inches!

Watching the sunset with my buddy Duffy

Watching the airplanes fly by

I couldn’t have imagined living such a great life with my new family and having such great friends!

Mia and I got off to a rocky start but we’re really bonding now! 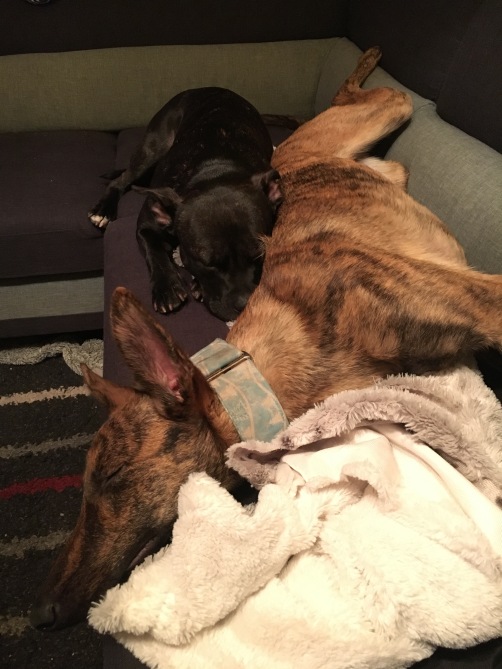 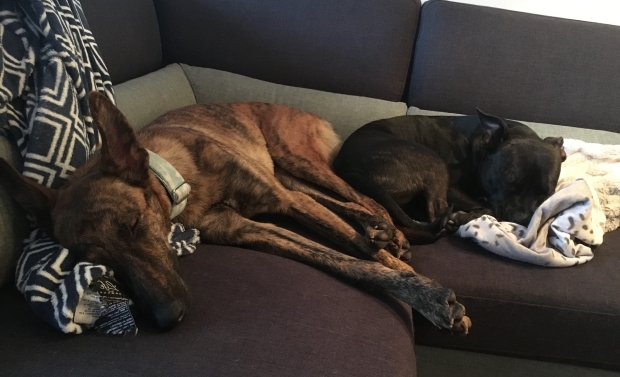 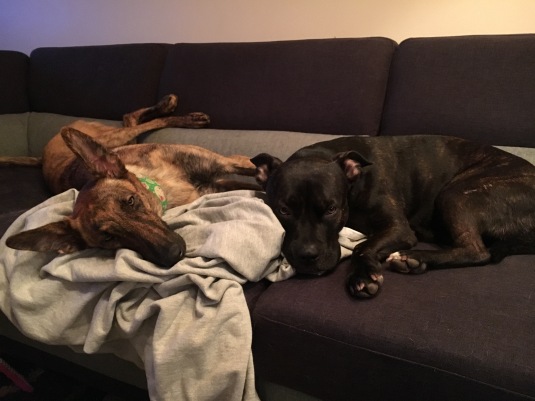 We both share a dislike for picture taking when we are trying to nap!

We both love a good run in the forest and a post powernap in the car!

Gobby face! Following in my sister’s footsteps! You’re not having enough fun until you’ve got gob all over your face! BOL!

We’re on the lookout!

Did I mention all the toys I get to play with?? This one is my favorite…it’s actually Mia’s but I stole it! 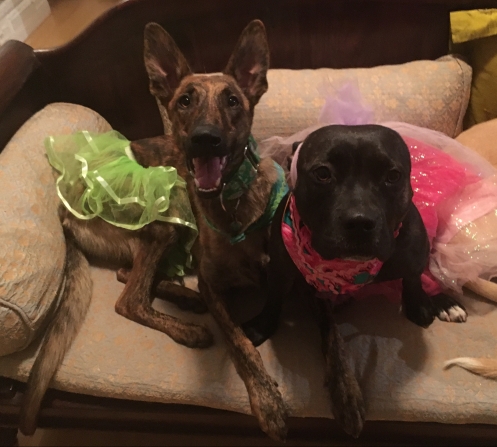 I’ll even put up with being dressed up! Mia doesn’t look too pleased. BOL! This was for Wilhelmina’s humoms birthday!

I really hope that one day all this terrible hunting will be banned in Spain and that all my galgo and podenco friends will be all free and living in wonderful loving forever homes. We have to keep fighting the fight and help all these rescues in any way we can!

A special thank you goes out to those who helped me and my family bring me here to Vancouver, BC. I am so thankful and appreciative to have such generous, caring people and dogs in my life! 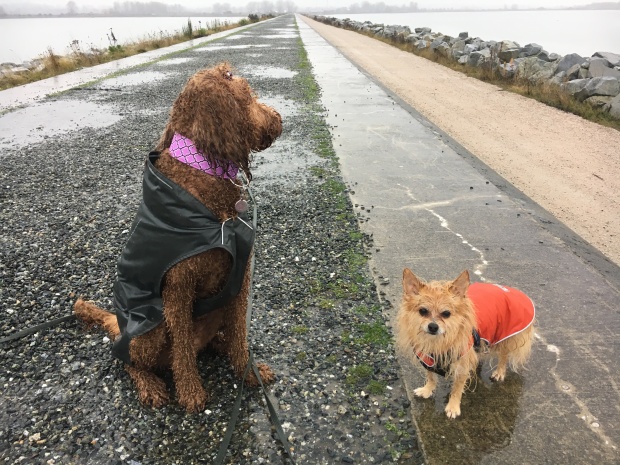 The sun decided to come out for us on our walk with Wilhelmina, Avalon and Duffy today! At first we didn’t know if it was going to rain so the humoms made us wear all our rain gear. 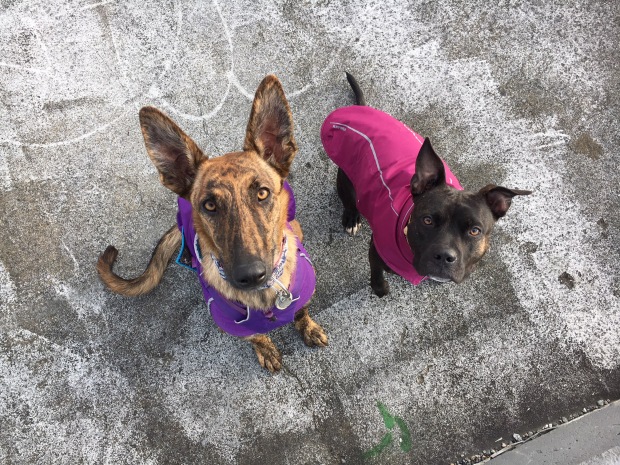 But as soon as the sun came through the clouds, off came the jackets! Of course this meant more photo taking. Sigh….Can we ever just go out for a walk without a photoshoot???

In their defense, the humoms said they just wanted to show off all our beautiful colors and markings. Well in that case…okay FINE…but just a few! Then we’re off to play! 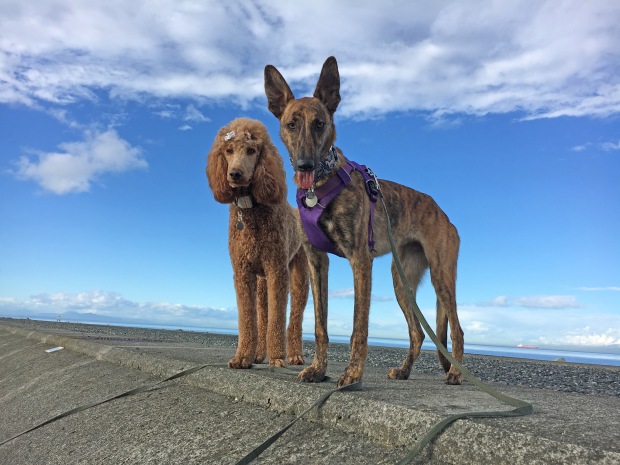 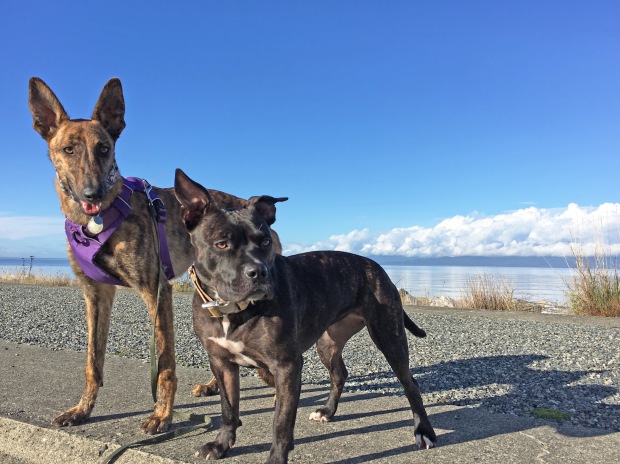 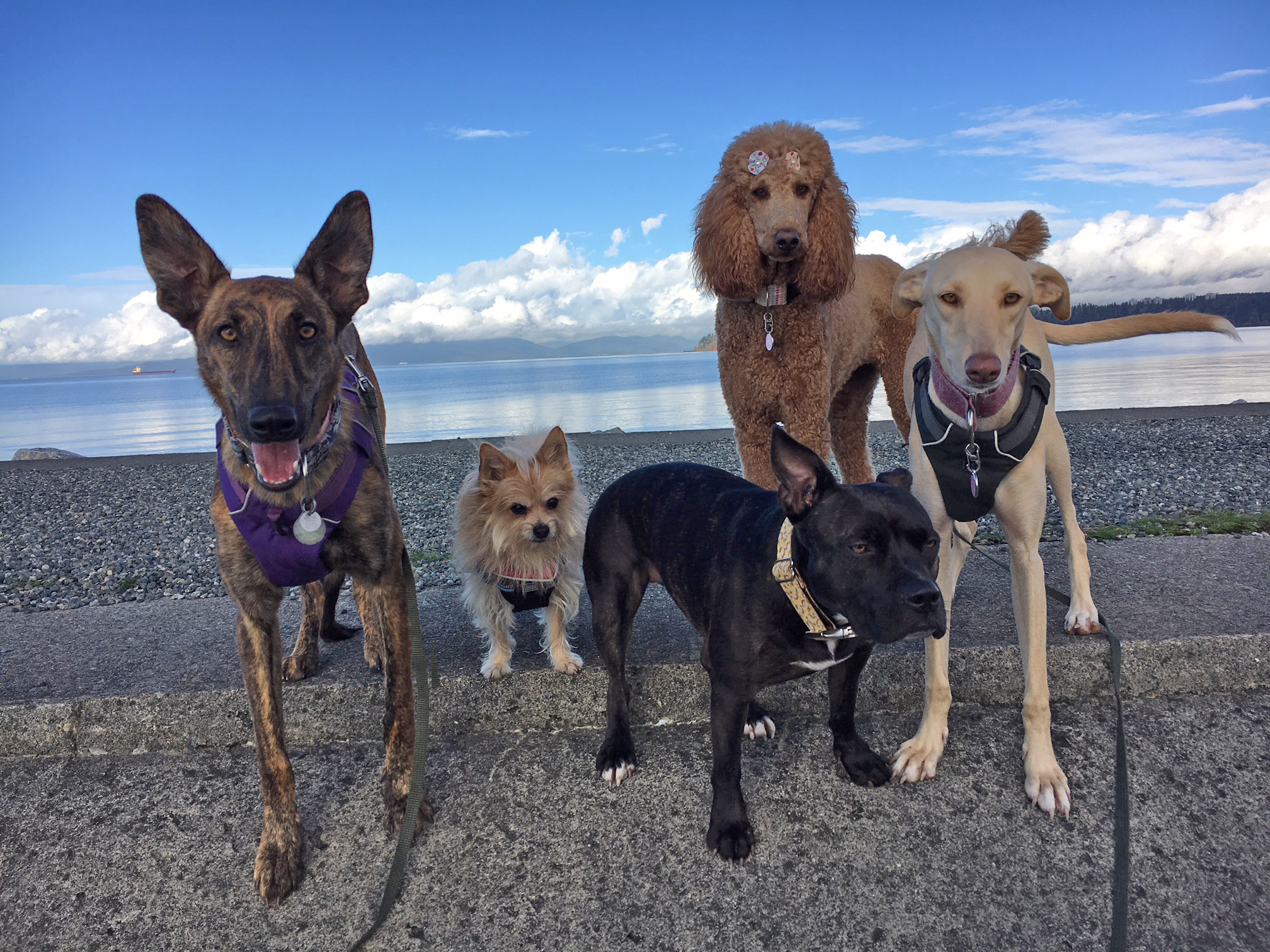 Hope you guys had a good weekend!