Vancouver, BC is known to have a lot of rain so when we get a period of hot summer weather many Vancouverites take advantage of it and head out to the beach!

My humom’s friends called us up and asked if we wanted to head to the beach with their little person Kaylie. I met Kaylie once last year when I was still a young puppy.

Kaylie and her dad found a tiny hard shelled ocean spider on the beach! But she didn’t want to touch it. I don’t blame her! I probably would have eaten it.

While they went to look for more critters I was swimming after balls!

My humom was worried the waves were getting too big but that didn’t stop me!

My humom was quite popular on the beach because she was throwing me the tennis ball.

It was was getting too hot so we had to take a break in the shade. I got bored so I started digging a trench with my ball.

Mia: Okay mom, I’m ready to go back into the water now!

My friends Rosie and Rocco also stopped by and I played fetch with Rocco. He’s ball obsessed like me too.

We’re patiently waiting for the ball to be thrown. 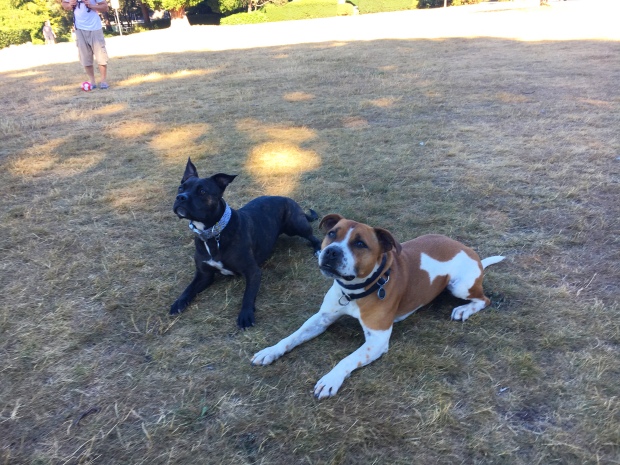 The humans were getting hungry for a snack so we walked to these two trucks that have food in them!

My humom got some kind of icy treat that looked like snow!  I was going to tell her to make sure not to eat any yellow snow but she got a snowball that was red. She said it tasted like cherry and it had mango drizzle on top.

Kaylie and her mom shared a treat together. I’m not sure what it was but my humom said it was ice cream inside a donut cone?

I tried to lick it when my humom was taking a picture but I wasn’t quick enough! Darn!

When we got home I was ready to take a nice nap but instead….I GOT A BATH!!!!!

Mia: Mom, how could you?? Is it because I tried to lick Kaylie’s ice cream???

Afterwards, I took my yummy yak chew and nibbled on it on the couch with my humom. It was a good day! Hope you guys had a good day too!

14 thoughts on “Beach fun with my friends!”